July 21 is the day to think about memory of 27 executed representatives of the revolt of the Czech Estates, revolt defeated in inauspicious battle upon White Mount, November 8, 1620. This defeat had meant the end of religious freedom in the Czech Crown Lands for more than two hundred years and had played a prelude to a catastrophe, completed after a few decades of war by the Westphalian Peace in 1648, affirming the victory of the House of Hapsburg in the Central Europe for a very long time. Czech Lands had become part of the Roman Catholic area, divided by the first “Iron Curtain” from the Protestant Europe. 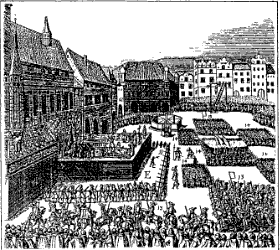 We can say without exaggeration that the representatives of the Czech Estates, executed on the Old Town Square June 21, 1621 [see the picture: The 27 Czech Protestant Intellectuals' Execution — 27 Representatives of the Czech Estates' Revolt (according to the historical engraving)], were the first victims of an ongoing violent “counter-reformation” and simultaneously the first victims of the constitutional changes prepared by winner from White Mount in the Czech Kingdom and Moravian Margravate.

The whole uprising of estates was triggered by attempts of recatholization, firstly visible during the reign of Mathias the Hapsburg (1611–1619), when the first direct sanctions against Protestant communities in certain dominions, belonging to the Crown or the Church, were practised. When, in December 1617, the Evangelic church in Hroby was destructed and similar church in Broumov closed, the protestant community was highly worried, also because of summer designation of Ferdinand of Styria, well known recatholizator who pushed back Lutheran Church in Styria and Carinthia, flourishing during the reign of his father Karl, as a king in both mentioned lands.

We also have to realize that the Czech Estates were deeply anchored in legal environment of religious tolerance and confessional freedom as it was present in land's laws from the second half of 15th century (by Agreement from Kutná Hora in Bohemia and by Book of Tovačov in Moravia). These rules were affirmed and even expanded by Rudolph's Imperial Charter in 1609.

We can surely consider these facts as motives for the Evangelic Estates (as the Czech Estates, Protestant in confession, called themselves) to start their revolt by the Third Prague Defenestration, May 23, 1618. From this single act had emerged the great European conflict, transformed from the Czech War into the Thirty Years one.

It is clear that the whole action was not prepared enough as well as it was not well thought out. The election of Calvinist Friedrich of Palatinate for the Czech King was not the most favourable one, because it had cut the Czech Estates from support of the Saxon Elector, Lutheran John George. This decision was probably put through by future representatives of the Unity of Brethren, especially by Václav Budovec of Budov, sympathising more with Calvinists. There was yet another problem, lying in the internal relations between the new king Friedrich and the land's government of the Estates. This had gone up especially on Christmas 1619, when preacher Skultetus “cleared” (with king's permission) the St Vitus' Cathedral in Prague Castle, putting away many artefacts and even damaging its interior decoration. That upset almost all the Estate representatives, not only Lutherans, but members of the Unity as well, not mentioning many moderate Utraquists.

Next problem could be found in the relationship between cities (the Burgess Estate) and petty aristocracy on the one side and leaders of the revolution on the other. This was a malign heritage of the inconsistence between the higher Estates (wealthy and influential houses) in year 1547, when the Czech Estates tried to provide a help for German (Imperial) Protestants, fighting in the Schmalkalden's War. That uprising was led by wealthy aristocracy but cities were the ones to bear the burden of Emperor's wrath when many aristocrats turned to be far more go-getting than longing for religious tolerance.

The main fault of revolting Estates dwells however in their lack of self-sacrifice. Their armies, consisting of underpaid mercenaries, were poorly equipped, and the Estates had refused the suggestions from the leader of the Evangelic Estates in Austria, Ignatz Tschermembel, who said that the cotters should be (in order to continue in the Hussite tradition) involved in the revolt by improvement of their social status.

It's needed to realize, despite all this flaws, that the main significance of the revolt in 1618 is this (citation from work of Josef Pekař, Czech first-class historian, Roman Catholic in confession and faith): “However different influences and motives were presented in Czech War and however weakly and unfortunately it was lead, the war itself is, and will be in its very core, the product of fear of moral violence, the act of defence against way of forcible counter-reformation incorporated in person of Ferdinand II the Hapsburg and from this we must decide about moral and cultural assessment of battling sides. It was not the higher culture, who won at the White Mount. And however high have been towers of baroque churches and ornate fronts of palaces in catholised Prague, their victorious stance can not banish the memory of tears and blood, filling the raped land after the years of terror, established by the winner” (Josef Pekař: Bílá Hora, její příčiny a následky). Executions and the preceding trial, so much resembling trials and executions of the sinister communistic regime in 1950, were bloody presages of what was just to come.

The trial for the great number of people accused of “high treason” was held by a scenario made by commission consisting of: cardinal František of Ditrichštejn, highest chancellor Zdeněk Vojtěch of Lobkovice, count Hohenzollern, prince Eggenberg, court counsellor Hegenmüler, deputy of imperial chancellor Ulm and counts Meggar and Trauttmansdorf. 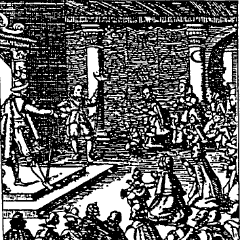 Those had discussed the method suggested by Vilém Slavata of Chlum and Košumberk few days before the battle on the White Mount. Slavata wanted to seize belongings of anyone who had participated on revolt in any manner and had committed the offence of majesty. Similar were suggestions from Jaroslav Bořita of Martinice. He, just a few weeks before the execution, called for punishment of rebels and for elevation of the Roman Catholic belief, what (as he claims) would not be possible in case of any pardon granted anybody of them (after a intercession of children begging for dismissing of their accused fathers — see a picture according to the historic engraving).

There were so many accused, that the commission was afraid of so much executions, looking as a vengeance. For this reason, the rebels were divided into the three categories:

1. Lightest penalty — people (even Catholic) doing nothing, just accepting Friedrich of Palatinate as the Czech King — those were to be punished just by a fine.

2. Heavier penalty — people serving the revolt in any kind of service or bearing some sort of office — those were to be punished by degradation and confiscation of property.

3. Death penalty — for the leaders of the revolt.

The commission wanted duke Maximilian of Bavaria, leader of the Catholic League, to be leader of the whole action and counts Hohenzollern and Hegenmüler were sent to discuss this matter with him in Munich. These both had also spoken with three most significant Czech Catholic emigrants in Passau — former highest burgrave Adam of Šternberk, Slavata and Martinic. After Maxmilian's refusal to play this “honourable” role (although he agreed on form of the punishment for rebels as it was suggested by Czech Catholics), Prague's “commission for execution” was established, lead by Lichtenštejn.

After the examination of separate cases, commission propounded on the first place verdicts for those, who had run away and condemned those, who were already dead. After a short session on April 2, 1621, king's prosecutor had taken action and after three days there were verdicts placed on all the gallows in Prague. Sentences of those who had died rebelling were put up also in April. Those were Petr of Švamberk, Albrecht Jan Smiřický, general Linhart Colonna of Fels (killed in Austria in preceding year), Michal Slavata and Oldřich Kinský. Other sentences were passed in May (17th — 25 sentences, 29th — 20 sentences) and June (12th — 6 sentences). So, together, it was 51 sentences made by the commission. 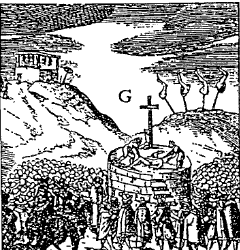 The whole trial was, in fact, like a well prepared theatre play, counting in acts of mercy and similar deeds of “humanity”. Cruel sentences were often lightened — quartering alive was, for example changed to quartering post mortem (as it was in case of Doctor Jan Jesenius, well-known physician). Verdicts suggested by Prague commission were considered to be too cruel as a whole and Vienna tried to lighten them, where it was possible.

Men condemned to dead and executed:

The macabre sight was to deter enemies of Hapsburgs and recatholization, but the executed men were soon considered as Protestant martyrs and their death started to be a subject of literal works. Preacher from the Smaller Town, Jan Rosacius Hořovský, who had accompanied many of those convicts before their dead, wrote a report on the whole execution called Koruna neuvadlá mučedníků Božích českých (Not-withered Crown of Czech God's Martyrs), printed in exile. Similar testimony was made by Pavel Ješín of Bezdězí: Posmrtná paměť českým hrdnům (Posthumous Memory of the Czech Heroes) and, of course, Jan Amos Comenius in Historie o těžkých protivenstvích církve české (History about Heavy Troubles of the Czech Church).

The martyrs from the Old Town Square were revived also in folklore. This is said, for example, in memoirs of Karolína Světlá: “Our uncles from Český Brod were all Catholics only by name and when they could get to Prague during the pilgrimage to Saint John, their first visit was to the Old Town Square, where they silently prayed, tears in their eyes, to martyrs of nation and faith. Then they went on bridge made of stone (the Charles' Bridge), where the heads of those martyrs were exposed, and then they visited the Bethlehem place, where the Bethlehem Chapel had once stood, honouring the memory of Huss.”

Similar relation to victims of execution proves also one of the old Prague's fables. It says that since 1631, when the heads of executed were secretly buried by exiles, at first in Týn and then in Salvator, the heads are alive and go every year in the day of execution on the Old Town Square, where they visit the place of scaffold and then go up to see the Horologe. The most of time, the heads are satisfied by regular functioning of the clock and go back into their grave. But if the clock goes uneven, the heads would be worried about the fate of Czech Lands and pray for the peace and nation. So it is clearly visible, that our remembering of these old events is not something new, artificial, but that the memory of 27 rebels have been still alive during all that centuries. 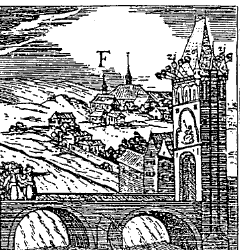 No wonder about that — the execution itself was terrifying and, what is more, heads of dead were hanged from the Bridge Tower's gallery for next 10 years (see the picture according to the historical engraving). Similar situation was in Žatec and Kutná Hora, where the heads of the executed Premier Mayors were nailed to the city's gate.

Menu of Category Perspectives and Opinions