The Way of the Waldensian and Czech Reformation

On Saturday October 25th, 2008 Historical Society VERITAS finished and devolved to public a new tourist marked path near Dačice and Telč on the south of our fatherland. It is the middle part of the so called Way of the Waldensian and Czech Reformation. The path should in future connect Southern Bohemia with Region Vysočina (when it will be realized in the whole projected route).

The ceremonial opening of the path held on May 15th, 2009 during the outer session of the international conference “Life in Europe in Mutual Respect” in Telč, organized by the Historical Society VERITAS on the occasion of 400th anniversary of the Charter of Rudolph II and Czech Republic's presidency in the European Union.

The path commemorates places of residence of Waldensians, i.e. group of Christians, whose movement in Middle Ages initiated the World Reformation. Followers of teaching of Peter Waldo came into borderland of Bohemia, Moravia and Austria due to the persecution from the Western Church at the turn of 13th and 14th century. In 1340 the first crusade against so-called heretics in the area of the current Czech Republic was taken against them; it was led by Oldřich of Hradec. Besides the crusade, there was also large investigation of the inquisitional court and captured Waldensians were jailed at Landštejn and Jindřichův Hradec.

Every educational table is divided into several parts: In upper part there is the name of the path in the middle, followed by stylized Bible and Calix on the left, i.e. the symbols of the Czech Reformation, in the design that the society VERITAS also uses as its logo. On the right from the name there is a pictogram with letter “i” and number of the table. (The numbering is continuous along the whole projected route. That is why tables in the already realized part have numbers from 8 to 14.) On the main part of table there is in the left column for all stops the same text generally about the path. There is tourist map in the upper right column with marking of the path's route there, incl. stops. Table, where tourist is standing in the moment, is encircled for better orientation. In lower right quarter of the table there is variable content that with pictures and texts notifies about specifics of the visited locality. The Czech text is on all tables translated into German language. 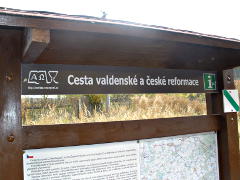 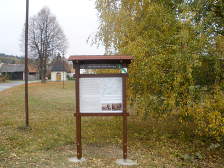 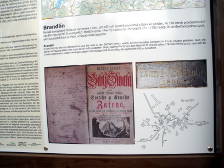 The middle part of the path starts at Klepák's Mill, important centre of the Fore-Toleration Period's Secret Church of the Czech Reformation. Rare books were conserved here, especially Bibles and hymn-books. The path further goes into village Brandlín. There lived several Bible-experts and there it was typical for love to books. After 150 years of the violent recatholization there remained more than 90 % of Protestant citizens. Later there existed Protestant school in the village, established by the Evangelic congregation in Velká Lhota near Dačice. Third stop of the opened part of the path you can find in Radlice. This village was in the Toleration Period practically whole Protestant, too. In one of farmhouses there was in the Fore-Toleration Period illegal library serving to the broader community of Christians continuing the Czech Reformation. Next table commemorates former so-called Charter' Church of St Spirit, built in the cadastre of the village Šach in 1609 just after the Charter of Rudolph II had been proclaimed. After the White-Mountain Battle was the church confiscated, after the Patent of Toleration it was not returned to descendants of the original owners and gradually has disintegrated. Before the Patent of Toleration there were secret worships of the Secret Church of the Czech Reformation in this church. The way to the next table goes along its ruin that its current owners even have not allowed to designate in terrain with an explaining sign. In the village Šach the marked path's table and the memorial stone (with year 1609 and symbols of the Czech Reformation) remember some important natives of Šach from the Fore-Toleration Period (Paul Jama, tortured to death for his faith in 1763, his granddaughter Elisabeth, who firstly as the only one of the whole family and underage applied for her belief in 1782 and encouraged her relatives, and finally also Marianna Macků, who was during hearing in the Fore-Toleration Period according to the local rumour forced to drink axle grease by a Jesuit). This village was as well from more than nine tithes Evangelic. Penultimate table stands directly in the Centre of Czech Reformation in Velká Lhota near Dačice. This village is unique for its state protected Evangelic Toleration Area the only one in the whole Czech Republic. Just here there is documented special development of the Czech Reformation in the Toleration Period. It is witnessed till nowadays by two Evangelic churches, standing close together, belonged originally to two Toleration congregations, the Lutheran and Helvetian one. In the second one there is permanent exhibition “Czech Reformation in the European Context”. However, the table shows with a photo of the common cemetery for Christians of both confessions in this village. The last stop of the opened part of the path is in the settlement Poldovka. It stands on the hillside of the hill Hradisko, the dominant of the whole surroundings.

The middle part of the Way of the Waldensian and Czech Reformation was funded by aid grant for development of the friendly tourism of the Southern Bohemia region and with contribution of other donators. We thank them for their aid here. The realization of both remaining (terminal) parts — the direction to the Lord's Well upon Javořice peak and on the opposite side to the surroundings of Kunžak — we plan for future years.

The tourist marked path is free accessible for both, pedestrians as well as bicyclists; it was marked strictly according to the methodology of the Czech Tourists Club, that is why it should appear in tourist maps as well. Its course you can study for example at map portal Mapy.cz.

PERMANENT MODIFICATION OF THE MARKED PATH'S COURSE: Since summer season 2016 we were forced to mark in terrain a permanent modification in comparison with the original shape. In the section between Šach crossing and Velká Lhota, there was made a pasture for cattle that anybody can bypass around enclosures. That is why you should continue from Šach to  Velká Lhota near Dačice using road instead and in the village turn left.

To all who are far away from this region of our fatherland we recommend the book Meeting after Two Centuries by Eva Melmuková-Šašecí. Its historical fiction, where the authoress, inspired by real events of the early Toleration Period documents circumstances and troubles with applying to the Evangelic belief in this area. She writes fictive interviews with historical personalities. “Meetings” were published continually in 1970's in the Evangelic Weekly Sparks of Constance, and then they were edited completely to the 200th anniversary of the Patent of Toleration and issued in 1983 by the Synodial Council of the ECCB as not bound cyclostyled brochure. You can find it with luck in congregational libraries or digitally in the VERITAS Library.

Leaflet (joggler) issued for the opening of the path in 2009
(established for double-sided print in format A5)
letakNS.pdf (1255 kB, Adobe® Portable Document Format)

Devolving the path to public in October 2008 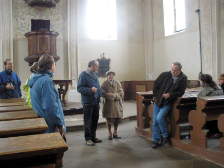 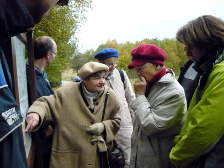 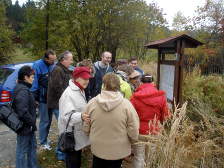 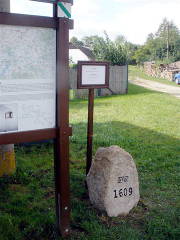 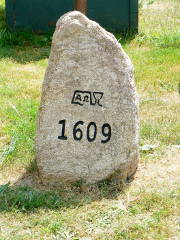 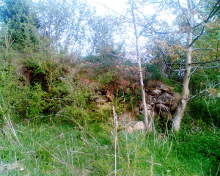 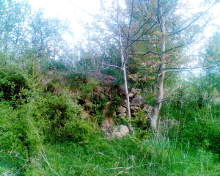 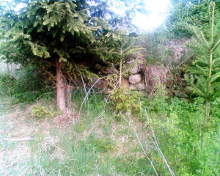 Map of the Way of the Waldensian and Czech Reformation 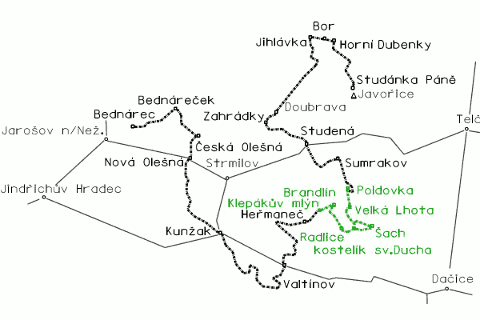