The Centre of the Czech Reformation

The Centre of the Czech Reformation in Telč and Velká Lhota near Dačice is divided into two parts:

The Evangelic Toleration Area, which is state protected as a monument consists of two protestant churches and two parsonages. It is localised in a small village called Velká Lhota near Dačice on the south of the Czech-Moravia Highlands. By the administrative way it falls in the South-Bohemian region, near Jindřichův Hradec (GPS: N49°08.459′ E15°20.119′). This Toleration Area is unique, the only one in the Czech Republic. An educational marked path leads through it, it commemorates on 10 informative boards allocated in the area the history and the importance of the place. 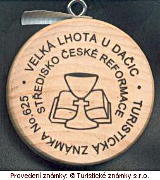 Since March 15, 2003, the Evangelic Toleration Area, denoted as the Centre of the Czech Reformation, has joined into the Touristic Tokens Places system in Czech Republic. Every visitor can at certain touristic-attractive places buy a wooden Tourist Token with branded marks — the symbol of the locality. It costs 30 CZK. The Token is a certificate of your visit of a touristic sight — it cannot be purchased elsewhere. You can also play a collecting-game with the Tokens. More pieces of information you can learn at the website of company Turistické známky Ltd. that manufactures the Tokens. The Tourist Token with ordinal number 625 was assigned to the Centre of the Czech Reformation and this place is belonged in group called the Church Monuments. On the Token, there is branded the main symbol of the Czech Reformation, i.e. a chalice in front of the opened Bible. 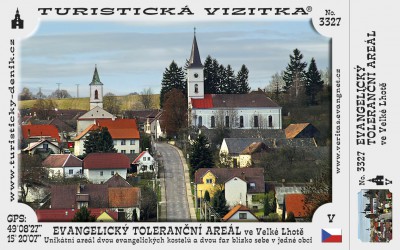 In 2015 the Evangelic Toleration Area was integrated into the project Wander Book. Interesting places for tourists offer an adhesive Wander Card with a photo and other information about the locality. Tourist can buy the card at visited places (price 12 CZK/0,5 EUR), put it in his/her Wander Book, add information about the date of the visit and other notes. Wander Card Protestant Complex in Velká Lhota has No. 3327 and has been classified as Church Landmarks and to the region Vysočina (Highlands).

The Token and Wander Card is sold in the Monument of the Czech Reformation, i.e. in so called “upper” church (the church with higher tower and turret clock) generally at the summer season. These in Velká Lhota can sell you the token and open the exhibition: Karel Lojka (No. 20). Besides, you can ensure yourself the special commentary to the exhibition by a member of VERITAS (as well as selling the token) after making an appointment by phone at the domicile of VERITAS (☎ +420 567 243 888).

The Evangelic Toleration Area with its buildings conserved in the rural village is the only one place in the Czech Republic that proves a unique part of Czech history.

It had more time for its own development, although it had to manage many difficulties.

The most eminent achievement of the Czech Reformation was for the first in Europe ensuring the conscience freedom for everybody, including dependants, usually without any rights. The fundament for the further law was so-called Treaty at Kutná Hora in 1485; the proper law is called the Charter of Rudolph II, issued in 1609.

Its validity was limited to relatively short time, till the beginning of the Thirty Years' War. The community in Europe had not been mature for understanding to the consequences of the mutual respect yet.

The Charter of Rudolph II was inactivated (symbolically cut) and for the period of consecutive 150 years any other confession that the ruling one (in this case the Roman Catholic) was not allowed here. As lately as the emperor Joseph II in 1781 issued so-called Patent of Toleration, which permitted the legal existence (although only facultative with limited rights) also to the three other confessions: Orthodox, Lutheran and Calvinist. He did not allow the return to the continuity of the Czech Reformation, though just that till then the secret Protestants expected and wished.

The Patent was mostly not published officially to the people, too. They widened the information about it themselves. In the surroundings of Velká Lhota there was great centre of the secret Protestants and they obtained the possibility of building the Toleration House of Prayer (the original not yet rebuilt so-called lower church) just in 1783. They also raised a modest house on the place of current lower parsonage for their preacher. Because the word “Evangelic”" (i.e. Czech term for “Protestant”) means “Lutheran” in German, the authorities established Lutheran pastor. However, the majority of the congregation in Velká Lhota wished to be Calvinist (Helvetian, Reformed) as well as the majority of other toleration congregations. They wanted to send an application for change of the confession, but the congregation had divided: greater part agreed; the minority was afraid of loosing of what they already had.

The application was eventually granted and suddenly, there were two toleration congregations in Velká Lhota. Reformed built another modest house for their pastor at the place of current upper parsonage, but both confessions had to share the House of Prayer. For 80 years they had to shift there. Meanwhile in 1830's both of them have rebuilt both parsonages into large storey houses; however the greatest change was still before them. In 1861 the so-called Protestant Patent was issued. It formally equalized all permitted Churches and all could build churches with towers and bells. In Velká Lhota there the Reformed built their new church (so called “upper”) in 1873, Lutherans enhanced the originally House of Prayer and constructed the tower and bells as well.

Not until 1918, after the Czechoslovak Republic genesis, the Church of the Czech Reformation was allowed to confess to its origin and both Churches of the artificially disunion became one in ECCB. The Evangelic Toleration Area (since 1992 state protected) remained to the Velká Lhota Congregation as a reminder of the interesting history.

The Monument of the Czech Reformation

The exposition acquaints one with renderings of historical documents. On many informative boards there is explained the developing context of the Czech Reformation since the Old Testament epoch to the present.

These four photos below you can buy in the Monument of the Czech Reformation. The first displays the panorama of the village Velká Lhota with both churches, the second presents the interior and exterior of the so called “lower” church (including the historical entrance from the Toleration Period), the third addicts the so called “upper” church with the monumental organ from 19th century, on the fourth photo there are the dominant of both churches and also two views to the exposition of the Monument. (Photo: R. David)