1. John Amos Comenius, the most famous Czech exile – the last bishop of the Unity of Brethren and the "Teacher of Nations"
– Comenius’ autograph ca. one year before his death
– Comenius’ watchword 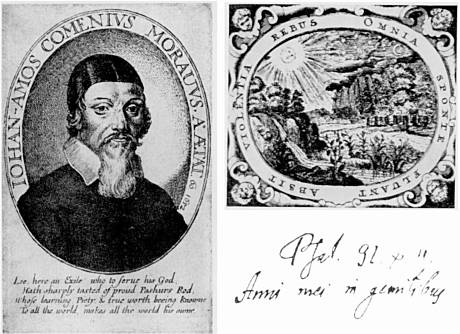 2. "The Testament of the Dying Mother Unity of Brethren" from 1650 – Comenius’ closing word over the Unity and his legacy for future generations 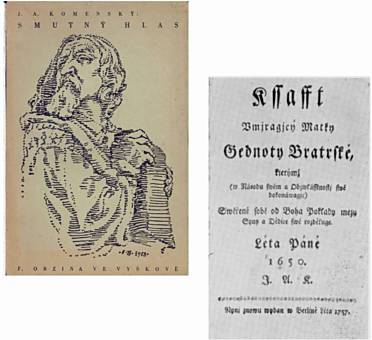 3. Title page of the first edition of Comenius’ study "Predecessor of Pansophia" from 1637 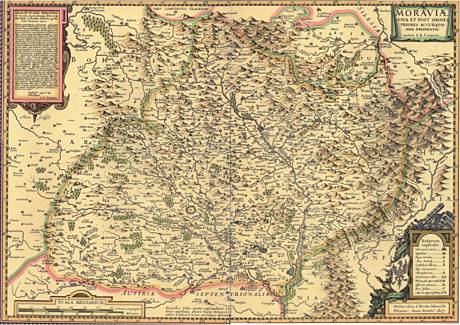 5. Pavel Stránský, author of the book On Czech State (Respublica bojema), where as exile in a very trustworthy way informed the European public about the national history and geography of his country 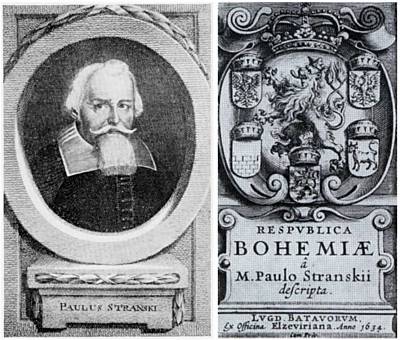 6. Self-portrait of Jan Kupecký, Brother exile, who rejected the court painter career of the Austrian Emperor for his belief 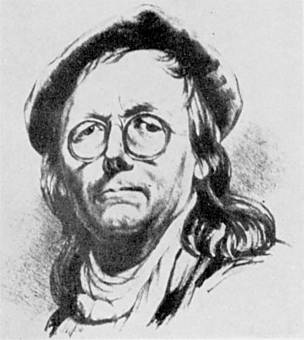 1. At the place of last refuge – in Amsterdam – J. A. Comenius provided help to the Secret Church in the shape of hymn-book and Handbook, i.e. the Kernel of the Saint Bible. 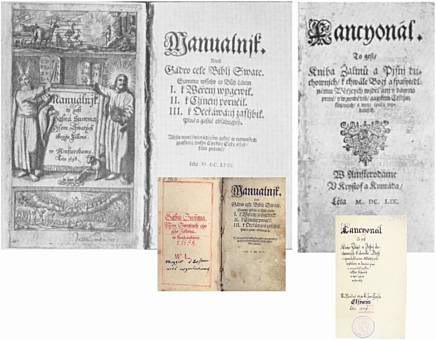 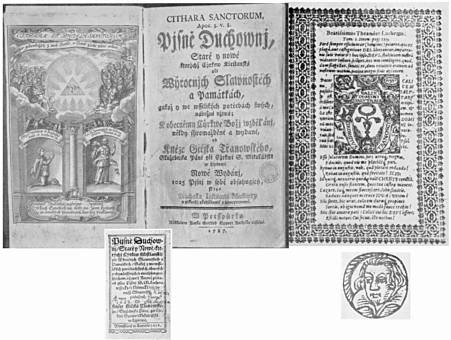 3. Great and commendable duty did in Zittau Wenceslaus Kleych as well. He exiled from Eastern Bohemia. He not only published books for the Secret Church – e.g. New Testament, he even distributed his books personally in homeland; despite it was very dangerous.
– Printer’ sign of Václav Kleych 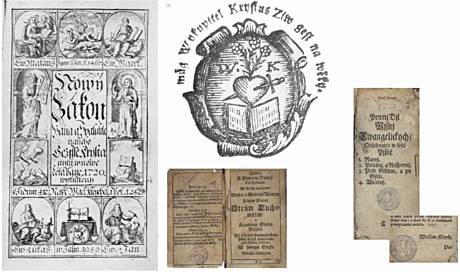 4. In 1727 there was in difference but also in good conscious of the continuity renewed the Unity of Brethren in Herrnhut; known as the Moravian Church, too.
– Count Nicolas Ludwig of Zinzendorf renewed the Unity with German exiles. The ordination of the original Unity was transmitted to Moravian David Nitschmann and Count of Zinzendorf personally.
– Almost immediately after its renewal the Unity started to serve to its surrounding believers with its "Daily Watchwords".
– "Czech Chapel" in Gerlachsheim from 1733, where exiles from Bohemia gathered 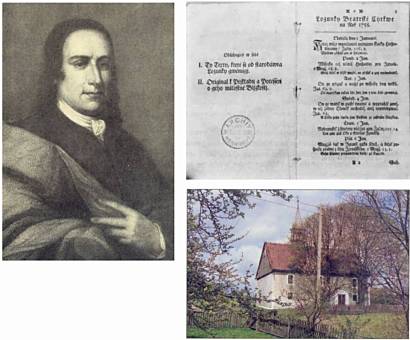 5. In Rixdorf (Neukölln) in Berlin there was established independent Czech congregation of the Unity of Brethren, some its monuments have been conserved till nowadays.
– Theofil Elsner’s Hymn-book, but also other books printed in Berlin, was used by the Secret Church till the Patent of Toleration.
– Burial church at the suburb of the town Strzelin served to Czech exiles.
New centres arose in originally Austrian Silesia and Kłodzko Land that the King of Prussia gained in the Seven Years’ War. He permitted Czech exiles to settle there. An important role had played also the "Temple of Grace" in Teschen. 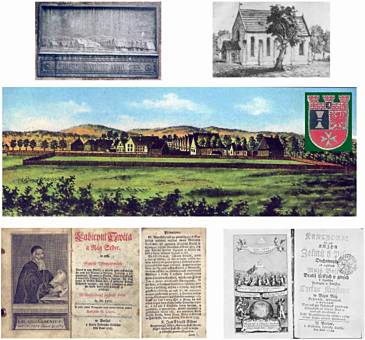 6. In the southern Slovakia there were many places (both, Lutheran and Reformed) always in contact with the homeland. Protestants went to the reformed village Reca for the text of the Patent of Toleration. 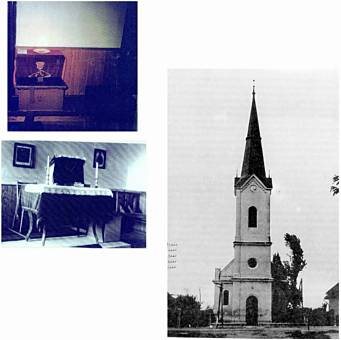 F 3 Secret Church of the Czech Reformation in Homeland

1. Hapsburgian kings in the Post-White-Mountain Period enforced hard the ideological monopoly. Especially Charles VI the Hapsburg issued in 1725 strict laws for brutal liquidating persecution of non-Catholics.
– Officials in authority had to compulsorily swear that they will chase non-Catholics. 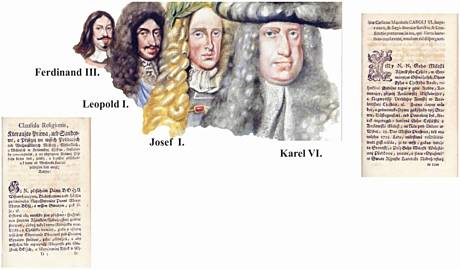 2. Jesuit Order worked hard in the same way. The most famous "missionary" was P. Antonín Koniáš.
– To help to his colleagues he wrote in 1729 "The Key Opening Heretic Delusion for the Recognition and Locking for the Disproval". There he determined destruction also for big part of Czech literary works from 15th to 17th century, including Bible of Kralice. 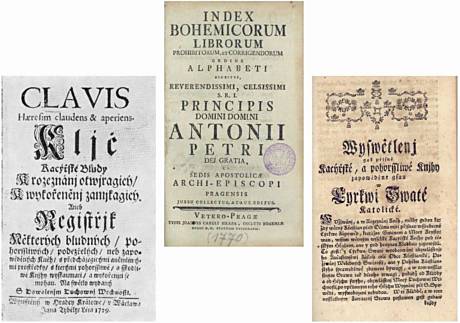 3. Rough violence unified Protestants of different confessions to internally uniform Secret Church of Czech Reformation. It created mutually connected home communities that gathered at many places, for example in narrow closets.
– The substitution for books taken by "missionaries" was not easy to gain, that is why experienced copyists often copied them. It happened in this till nowadays conserved barn as well. 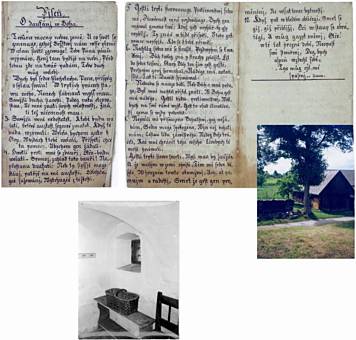 4. The Secret Church made soon very dense network of connections – situation in 1730

5. Then after rough strikes the network became torn – situation in 1760 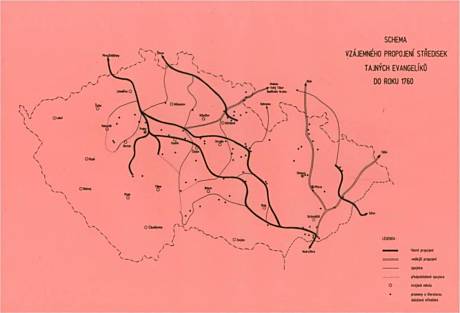 6. One year before the Toleration there remained except one connection only ruins of the original network – situation in 1780 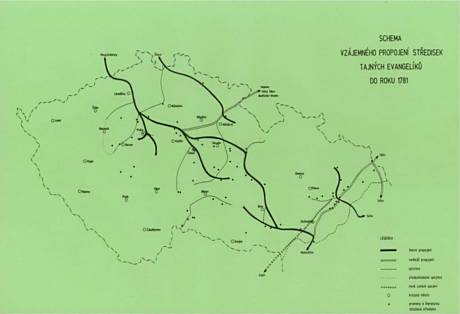