Photographs from the Young Historians' Visit of the Saxon Land Exhibition in Torgau,
August 23 to 26, 2004

The visit was held in August 23 to 26, 2004. The exhibition had a subtopic: “Glaube und Macht” (ie. Faith and Power) and concerned on Saxony in the Europe of the Reformation Era in 16th century. There, the young historian group and the Society VERITAS were represented by: Hana Jalušková, Martina Koubová, Eva Melmuková, Jana Nováková, Richard David, Martin Kolínský, Petr Melmuk, Ondřej Srba and Richard Vlasák. R. David is the author of all photos. For easier understanding to the photos read the Young Historians' Report from the Visit of the Land Exhibition of Saxony in Torgau that was written for the Voice of the Centre of the Czech Reformation No. 9/2004 by R. Vlasák. (Click on the photo to enlarge.) 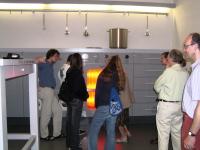 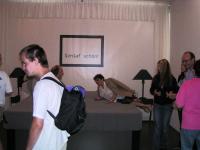 This trinity of photos catches the members of VERITAS and young historians at the exhibition about adolescence in the congregation house of the Lutheran Evangelic Church of Saxony in Torgau — the furniture and equipment of the household were made zoomed to super-real size in order to learn how a small child feels the flat equipment giant and how difficult is e.g. sitting down on the chair or laying down on the bed. 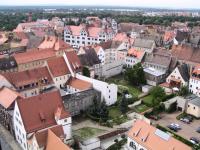 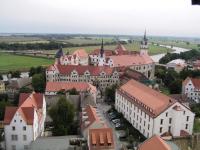 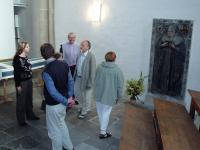 On the second triad of photos there are views from the tower of the Gothic church of the Virgin Mary (Frauenkirche) over the old-fashioned city of Torgau and the Elector's castle — the summer place of the Dukes of Saxony Hartenfels — where the exposition of the Land Exhibition of Saxony was installed (river Elbe in the background). In the church there is also the gravestone of Luther's wife (former nun) Katherine from Bora. 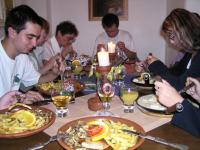 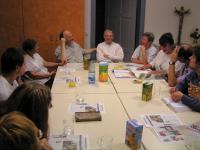 As you can realize from this two photos, German friends took care of the visitors from Czechia very well. On Tuesday evening young historians discussed with members of the Evangelic Church Congregation in Torgau the topic: “John Huss and Martin Luther for Current Young Human”. 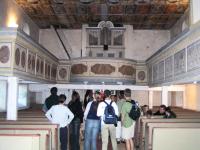 The city of Torgau is famous also from the modern history as the place where the Red Army met the allied forces “by Elbe” during the liberation of Europe from the Nazi's domain. The first photo shows the Memorial of this meeting. The last three photos were taken at the Roman church in Klitschen. On its wooden panted ceiling there is the portrait of M. John Huss as well.

Adapted and translated from: Magazine of Selected Lectures Delivered at the 9th Work Assembly of the Young Historians 2004, pp. 18–20.

Photographs from IX Work Assembly of the Young Historians
July 9 to 16, 2004

The main topic of the ninth Assembly was the Sources of the Thirty Years' War. Photographs show the atmosphere of the Assembly: special discussion on the topic, trip to Nová Říše, snapshots from the “Provincial Congress of Bohemia” session in 1620 that discussed the political situation in the land and Europe in this year. There also a delegate of the Jesuit friary appeared and defended the opposite opinions against the majority of the present members in a blunt way. The last picture is from the sharing of goals for the terrain exploration — reconstruction of villages up to 1871. (Click on the photo to enlarge. Photo: P. Melmuk)

Twelve people joined the third year of the Voluntary Work. This time it was held in a shortened term, because most of workers preferred exclusively only this range. The Young Historians completed the whole volumes of magazines for filing to the VERITAS Library, translated an English article about a Hussite Missionary Paul Crawar and conferred on the Work Assembly 2004. The album of photos below documents the atmosphere in the best way. (Click on the photo to enlarge. Photo: J. Rašín) 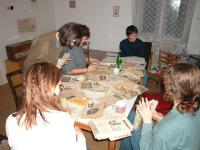 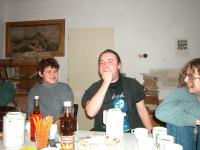 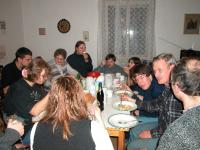 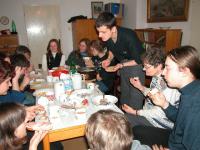 XVIII Seminary for Teachers and Others Concerned in History, Czech Language and Social Disciplines
Pardubice October 18, 2003

The autumn Seminary was focused on the topic: “The Interpretation of the Meaning of Czech History in the View of 20th Century”. First the lecture of moderator VERITAS PhDr. Vladimír Sakař, CSc., was read and then talked doc. PhDr. Eva Melmuková (on the right). Both lectures will be printed in the Bulletin VERITAS No. 12/2004 that will issue at the end of May. Two photographs from the Seminary follow. (Click on the photo to enlarge. Photo: M. Soukup)

Voluntary Work of the Young Historians in Telč
September 26 to 28, 2003

This voluntary work took place in the official domicile of VERITAS in Telč, more than ten young historians participated. With a great effort the room of former confectionery workroom in the rear penthouse of the house No. 21 at town-square was cleared out. The attic will be gradually adapted to library, study and depository. The VERITAS Library will then move to the attic from the temporary place in Velká Lhota near Dačice.

There are few snapshots from the work course. (Click on the photo to enlarge. Photo: M. Soukup)

Menu of Category About Veritas